Charles III when he was just a prince

In a country otherwise wracked by disease, pusillanimous politicians, climatic weirdness and economic storms, the smooth transition of power from Queen Elizabeth II to King Charles III comes as a balm.

With a magical Full Moon in Pisces conjoining mystical Neptune, we can dream big … at least for a while.

This morning, at 11am, Charles was officially proclaimed king.

The glorious Pisces Full Moon was exact to the minute, sending a beautiful trine to Charles’ Scorpio Sun, and quincunxing his regally super-powered Pluto in the first house. The King came into his power.

Of course, he became king as soon as his mother passed, but this was the political announcement, so it’s interesting to look at that chart compared to his.

There is a clutch of interesting transits to look at.

The Nodes are the destiny points in a chart — and a nodal return, which happens every 18 and a bit years usually marks a change in life direction. This always even more potent for Charles because he was born on an eclipse — his Sun is in Scorpio and his Moon is in Taurus conjoining the North Node. And they are also in critical houses in his natal chart. The North Node in the 10th house of career speaks of a public destiny, and the South in the house of family speaks of an inheritance that may be shared or distributed. Perhaps the latter speaks of how he has had to “share” his whole family with everyone.

The transiting South Node — a point of dissolution — has already traversed his natal Scorpio Sun. That was one more skin sloughed off this Scorpio.

The Nodal Return exact is approaching, but this change has been clear to him since the nodes went into Taurus at the start of 2022. Currently, the Nodes are pretty much on the midpoint between Charles Sun at 22° Scorpio and his Moon-NN conjunction. When the exact Nodal Return comes next year this phase will reach completion with his coronation.

Taurus-Scoropio is the axis of money-power. We move from a queen with Sun in Taurus and Moon in Leo (all that bling, the hats, the parades) to a king with Sun in Scorpio and Moon in Taurus (still a love of luxury and comfort but not of display).

At the moment of the proclamation, the Ascendant was on Charles’ South Node — goodbye to the prince, hello king.

It’s well known that Charles wants to cut the number of people on the Civil List, that is royals and their hangers-on paid for by the tax payer. It’ll be interesting to see what else he streamlines. Could it be time to give Buckingham Palace to the nation? Or is this a case of letting go of the other realms — Belize, Australia, New Zealand, Canada? There is no doubt that many have been holding off becoming republics out of deference to a very old lady. Then there’s the question of all that royal money off shore…

Also at the moment of the proclamation, the midheaven lined up with Charles’ powerful Pluto in Leo. I have wondered how Charles is going to feel. He has been quite an outspoken prince, with opinions on things, and if he follows in the tradition of his mother, he will be silenced. Indeed, he may find himself signing legislation — such as allowing fracking — that is completely against his principles. Pluto is a kind of invisibility sometimes. So although he will be more “powerful” on paper, will he be less powerful in fact.

Charles’ Pluto Ceres conjunction is critical. The asteroid Ceres seems to be associated with public service. She appears powerfully in the charts of popes, for example, — and it’s notable that Charles’ has a Pluto-Ceres conjunction in the first house: a powerful public servant. But this is in Leo, the sign of kings. And you can see that Ceres is just on her four-yearly return.

Ceres was an extremely important deity in Rome, obviously associated with agriculture and the land. And it is noteworthy that Charles is a massive land-owner, and has transformed his holdings over the past few decades to use organic and sustainable methods.

What is really extraordinary about Ceres astrologically though is that by Secondary Progression, she has also returned to 20° Leo. This was due to the fact that by progression, she has been retrograde for most of Charles life. Now the time is ripe (a good word for the goddess of the corn) and he is here to wear the crown.

You cannot overlook the transit of Chiron in this chart. The centaur-teacher is on the new King’s midheaven, possibly indicating to us exactly what kind of king we may expect. Chiron has been going back and forth over this spot for months.

This being astrology that meaning could go either way. Will he be able to heal this fractured group of nations? Or will he be seen as too wounded to do so? For those who doubt that Charles is ready or able, this is a challenge. He was born with a Sun-Chiron conjunction — a sense of being different, awkward, a desire to help. And now as he becomes king, that Chiron comes into action.

You often see this transit when a person becomes a teacher or doctor. As a Scorpio, Charles is well able to see problems, and he has a track-record of seeking real-world solutions — farming organically, building sustainably, seeding business (Ceres-Pluto again) with the Prince’s Trust.

Charles was an active prince, a man with passionate opinions. He is bound to reshape the monarchy — and he’s had quite a while to work out what he’s going to do. Will he be carrying Chiron’s healing message?

Juno is the queen of Olympus, married to Jupiter — and if you ever see this conjunction in a natal chart, sit up, it’s often a sign of a real winner. Wherever Juno is, there is the crown.

Transits between these two are important also — and this one only comes round every 12 years. These two will make a conjunction on 22 January at 4° Aries. Yup, that’ll be less than a degree away from where Jupiter is today. This may be the coronation — or it should be!

The Pisces Full Moon was, of course, conjoining Juno, who is precisely trining and sextiling the Nodes. The royal crown found her destination. What is more she is on the point of a Yom — the so-called finger of God — with quincunxes coming from Charles’ natal Pluto in Leo and Neptune-Venus in Pisces.

Uranus, the planet of change, is transiting opposite Charles Sun, conjoining the transiting North Node in his 10th house of career.

And Neptune in Pisces approaches his Midheaven, trines his Sun. He is benefiting from some Neptunian stardust, perhaps — or is this an awakening? Neptune is critical to Charles natal chart, sitting as it does on his IC conjoining Venus. Perhaps he really does have a mystical connection to the land. This certainly suggests a spiritual, idealistic foundation to his beliefs.

We shall see how it all unfolds. Let’s hope that Charles lives up to one of his middle names, Arthur, and has woken from his long sleep, ready to rescue Albion.

Well, we are allowed to dream big dreams with that luminous Full Moon and Neptune in the sign of poetry and song. 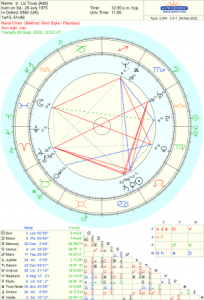 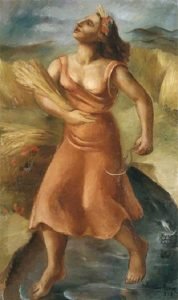 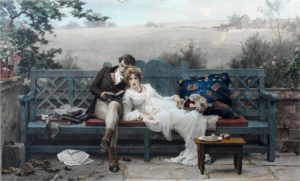